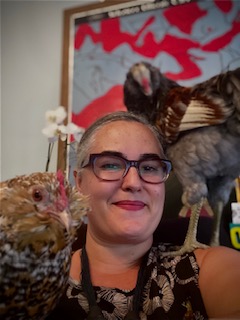 As a media executive, producer, anddirector, Alexis Fish has worked at the forefront of LGBTQ media for more than15 years. In 2019, she joined Valence Media as a Vice President focusing oncreating LGBTQ verticals across all the company’s brands, including Billboard,The Hollywood Reporter, MRC Film & TV, and Dick Clark Productions.

Alexis led the launch of the firstBillboard & The Hollywood Reporter Pride Summit. A critical and commercialsuccess, the event introduced the brands to an entirely new creative, consumer,industry, and sales audience. In its first year, Billboard Pride, for which sheserved as editor, was nominated for a GLAAD Award for “Outstanding OverallMagazine and Coverage.”

As part of the executive leadership atValence, Alexis works with each division developing, advising, and overseeingprojects focused in the LGBTQ space. One of her greatest joys is finding andintroducing emerging LGBTQ talent and stories to their respective developmentand division heads at Valence’s TV, film, documentary, and media verticals. Shealso works closely with human resources to introduce and support best practicesfor creating a safe and supportive work environment across Valence Media.

Alexis is currently developing andprogramming the second annual Billboard & The Hollywood Reporter PrideSummit, which takes place June 13 and will include a prom. Produced andpresented digitally, the event will reach a global online audience. Thecombined programming will bring together the largest gathering of LGBTQ artistsever assembled for a virtual event, including Lena Waithe, Billy Porter, NoahCyrus, Mary Lambert, and Carson Kressley. The summit and prom will coincidewith the Hollywood Reporter’s first annual Pride issue and Pride List, as wellas the third Billboard Pride Issue. Alexis works closely with the teams acrossprint and digital to ensure that Valence’s media properties are delivering themost responsible and inclusive coverage of artists, business executives, andindustry news in the Pride space.

Prior to joining Valence, Alexis was recruitedto help Conde Nast launch their LGBTQ online vertical, them. As a foundingeditor and head of video for them, she directed and produced the brand’s firstonline video content. "How to Raise Trans Child," which she producedand directed virtually over FaceTime, has garnered millions of views on socialmedia.

Alexis sits on the Board of Outfest, oneof the largest LGBTQ film festivals the world, was an advisor for the launch ofLesbians Who Tech, and has mentored LGBTQ leaders in the entertainment industrythroughout her career.  She graduatedfrom Smith College with a degree in political science.